What Are The 4 Different Types Of Blockchain Technology?

Every block is secured and linked to the previous one with a hash of the contents. If someone tries to tamper with a block, they would also need to change the hash of that block and all subsequent blocks. The system is designed so that this becomes exponentially more difficult as time goes on.

The blockchain is the basis for Bitcoin transactions and has gained traction in industries like accounting and law, education, logistics, supply chain management etcetera. Though it was initially developed for digital currency exchange, its potential use cases are virtually unlimited. 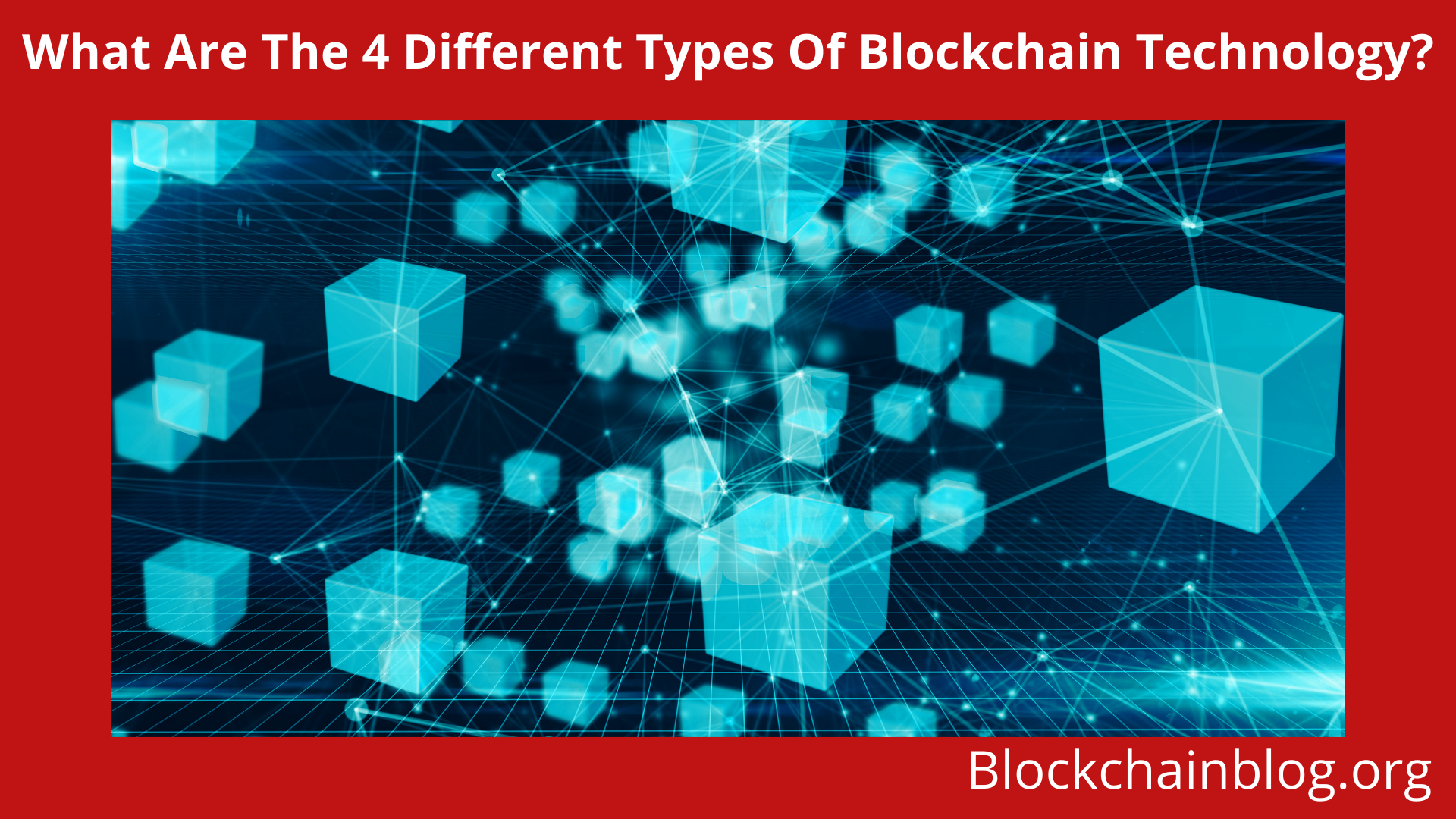 Why do we need different blockchains?

There are two main types of blockchains: public and private. These two are fundamentally different in the way their code is developed, maintained and used. Moreover, there are Hybrid blockchains that combine features of both private and public blockchain.

The Decentralized Ledger Technology (DLT) powers blockchain and is designed to provide an open and decentralized platform where all stakeholders in a network can access the ledger and, therefore, its data in real time. A public blockchain is open to any individual or business whereas a private blockchain requires permission to partake or access the network. Though private blockchains are not open to everyone, the administrator does not change existing rules once they have been set in place.

Public blockchains are based on open source code and anyone can join the network as a user or node (a machine with a copy of the ledger on it). All nodes in the public network are equal.

Private blockchains are based on code that is not open source, they are controlled by a central authority and require permission to access them. Access can be granted to anyone who has been approved or the blockchain could be closed off and only allow certain people or nodes inside it.

Private blockchain setup is more cost effective than a public blockchain as it does not require the nodes to perform the heavy computation involved in Proof of work (PoW) consensus. This makes them fast and by design they should be secure, immutable and auditable. A private blockchain doesn’t need to be decentralized as there is an authority approving who can access it (authorization). This also allows for more control over who has access to the network. For example, a private blockchain could be used by an organization like Walmart, where only suppliers or stakeholders of Walmart would have access to the network. As a result, you would have one central entity that maintains this network rather than a large community of users contributing to it.

What are the advantages of private blockchain?

In order to keep out malicious users, private blockchains need a massive computational power. This results in increased transaction fees, which can create pressure on businesses that use a private blockchain for maintaining their ledger. Private blockchains also consume more energy compared to public ones. This is because they have nodes that are not distributed throughout the world.

How is the potential of private blockchain being realized?

The recent development of Hyperledger Fabric (a permissioned blockchain framework) has made private blockchains a reality. It is a modular architecture built for enterprises and is designed on the basis of open source principles. It provides all the benefits of DLT to a business while at the same time maintaining data confidentiality, transaction privacy and data control. The extremely customizable nature, easy to use features and simple deployment of Hyperledger has made it one of the most sought-after open source frameworks for organizations wishing to deploy DLT solutions.

The most important advantage of public blockchain is that its users are in complete control over their assets (digital currency) and the data on the blockchain. The nodes on the network also maintain a copy of the ledger, which means they are required to reach a consensus whenever any transaction is recorded or initiated. There is no central authority in control of managing nodes or approving transactions and this results in faster transaction speeds for global payments.

As we just saw, public blockchains have a distributed ledger whereas private blockchains are centralized. Hybrid blockchain, as the name suggests, is a combination of these two.

The decentralized network structure in hybrid blockchains is provided by public blockchain and the centralized nature of private blockchain is replaced by decentralized ledgers. It allows for peer-to-peer transactions and maintains data privacy and security while at the same time giving access to authorized individuals or businesses. Examples of this type can be seen in Ripple; an enterprise solution enabled for global financial transactions. Using Ripple banks can transfer funds internationally in real time without using third parties such as SWIFT.

Hybrid blockchains are built on a distributed ledger, which allows for faster transactions compared to public and private blockchains. For example, Bitcoin can complete transactions in 1 minute whereas Ethereum can do so in 15 seconds. There is also no need for a private company to host the network as the nodes that power it are spread across the world. This improves security and speeds up transactions as there is no centralized point of failure that might be exploited by hackers.

The most prominent disadvantage of hybrid blockchains is their high cost for running servers and maintaining the entire network. This is one of the reasons why centralized blockchain projects are more preferred.

Use Cases of Hybrid Blockchains

Hybrid blockchains are used for enterprise purposes, which require secured and private transactions. These include financial networks and trade settlements platforms. Moreover, Real Estate can also use hybrid blockchains to decentralize the property registry while at the same time maintaining security and regulatory compliance.

Consortium blockchain is a distributed ledger that has partial control of assets and data by a central party. It allows for consensus between multiple parties to take place before transactions can be processed. Benefits of this approach include:

A high level of confidentiality as data and transactions can only be accessed by authorized parties.

Secure voting systems, economic systems and governance models can be built with this type of blockchain.

Other than the lack of ability for anyone to do anything without the approval of a central party, consortium blockchains have all the advantages of public and private blockchains. It can also support smart contracts just like Ethereum, although it is limited to approved parties.

The process of consensus is central to a consortium blockchain. This means that any node can block a transaction from happening, and it requires many users before the transactions can be finalized. As more nodes are added, the network slows down due to the additional processing power needed for verification. If there are conflicts between parties, it could lead to delays in transaction processing.

Use Cases of Consortium Blockchains

The most popular use of consortium blockchains is in the financial world, where parties can select who can access their records and how much information they share with others. This is how digital assets come into existence. Moreover, food tracking technology is embedded into smart phones, which are increasingly being employed by consumers in the grocery store as way to keep track of their shopping. So, many more data points are being created and used to make decision making in food production and consumption more efficient.

The value of data lies in its ability to create new products, services, brands and connections that benefit consumers and the industry.

What is the fastest Blockchain?

There has been a lot of debate regarding whether private or public blockchains are the most efficient. The test that Satoshi conducted on Bitcoin almost 2 years ago showed that Bitcoin was the fastest and most efficient blockchain. Since then, there have been projects started that aim to improve on this efficiency such as lightning networks and sharding. Despite these efforts, even the most advanced projects cannot compete with Bitcoin in terms of speed. This means that if you want your network to be more decentralized and faster, it is best to use a public blockchain such as Ethereum or NEO.

What is the most popular Blockchain?

In terms of popularity, Bitcoin is far ahead of any other blockchain. In 2017, it accounted for over 75% of the total value in cryptocurrency market. Ethereum has recently overtaken Bitcoin as the second most popular blockchain.

The Bitcoin blockchain is used by the majority of cryptocurrency projects because it is the most secure and efficient. In this sense, Bitcoin is also like a standard that all other blockchains are measured against.

What is the biggest Blockchain?

The biggest blockchain in terms of size (in GB) would be Ethereum. The Ethereum blockchain is over 1TB in size. This means that it would take more than 20 hours to download without any torrent software. To put this into perspective, a normal movie with a bitrate of 350MB can be downloaded within 10 minutes on a good internet connection.

Blockchain technology has the potential to bring immense value to businesses. It can be leveraged for transactions, storing data securely and for creating decentralized applications. Blockchain is the secure way of storing information that is verified through consensus of all nodes in the network, which are spread across the world. The decentralized nature of blockchain allows users to have more control over their assets while at the same time maintaining high-level security and privacy.

The most popular blockchains available today are public blockchains as they provide benefits to a community of users by incentivizing participation with digital currency, thereby increasing its utility value. Private and consortium blockchains are cost-effective solutions for enterprises willing to protect their data and remain in control of it.

To conclude, public blockchain offers more security and privacy to users while bringing down costs compared to private blockchains. These are just a few examples of the benefits that comes with using a public blockchain. A blockchain developer can make use of this technology in their business for better services and faster transactions.

Jonas is an entrepreneur and crypto enthusiast. He has been releasing cryptocurrency content since 2015, and prior to that at university he co-founded multiple student groups related to technology, entrepreneurship, startups etc. Jonas focus is on developing blockchain solutions for real-world problems.

Got a question or an opinion for this article? Share it with us! Cancel reply

Home » What Are The 4 Different Types Of Blockchain Technology?