In this article, we’ll discuss what Polkadot is, the concept of parachains and why they’re important. We’ll also examine the history of Polkadot and what makes it unique.

Polkadot is a blockchain network that allows for interoperability between other blockchains. This will allow Polkadot to be used by companies and organizations for decentralized applications (dApps). 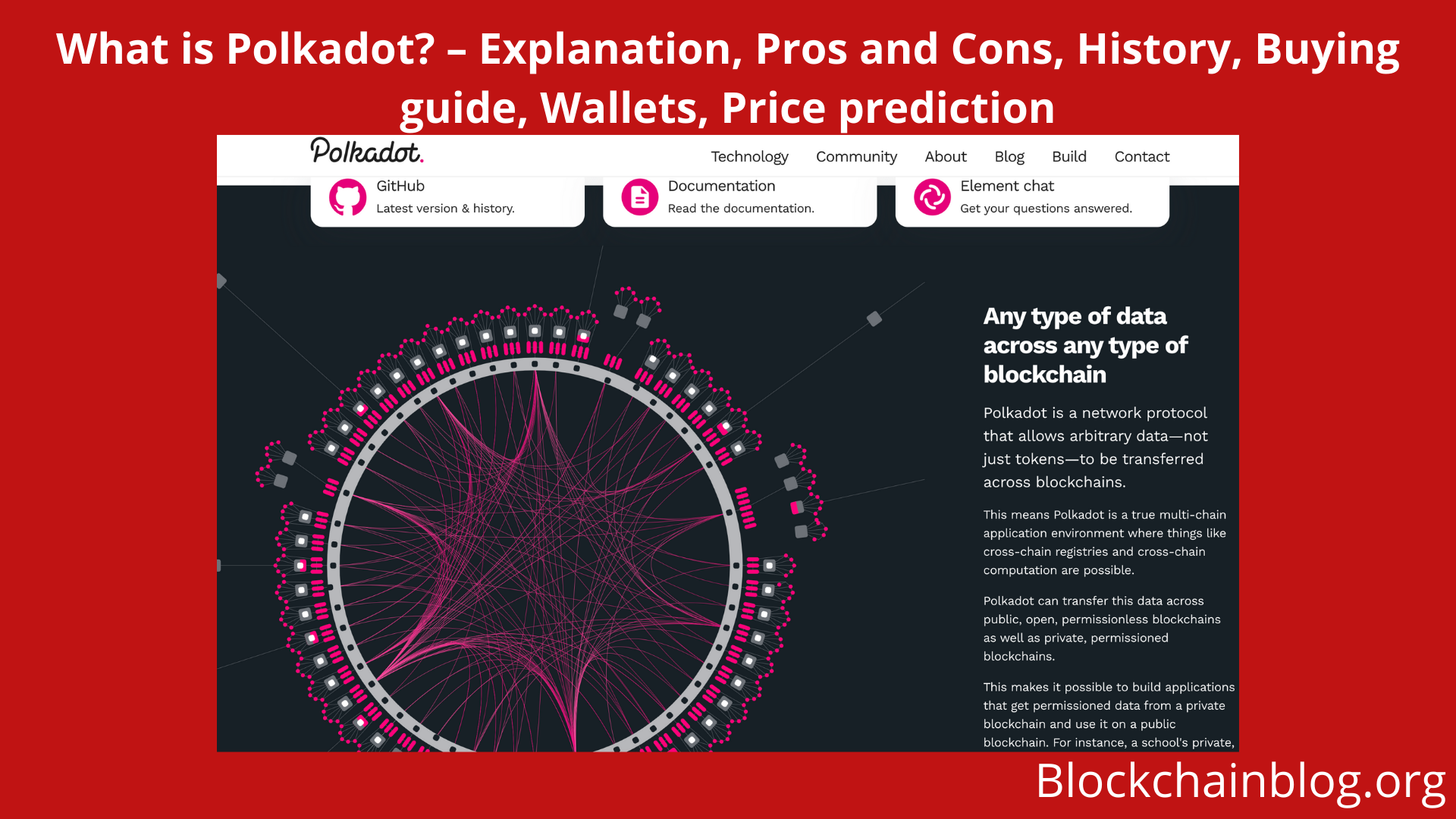 The idea for Polkadot actually dates back to 2014. However, the concept changed drastically over the years. In 2017, Polkadot was re-imagined to be a multi-chain platform. A Multi-Chain blockchain is essentially an extension of a single blockchain into multiple blockchains. However, in this case, these blockchains have distinct purposes with different rulesets (e.g Proof of Stake vs Proof of Work).

Polkadot will use proof of stake (PoS) for the minimum number of block producers. These block producers will have some authority to produce and validate blocks on Polkadot. The team at Polkadot, however, has stated that they are open to exploring other consensus engines in the future (e.g Proof of Work).

Parachains and how they’re important

I think it’s very important that a blockchain network have many different blockchains interoperating between each other within the network. This allows for a wide variety of dApps to be built, thus increasing demand for more dApps overall. This will further support the Polkadot network and further increase demand for dApps on the network.

Parachains will allow these blockchains to connect with each other. This means that instead of a single blockchain, we can have multiple blockchains within an organization or simply a wide range of blockchains that can be used to build dApps. Having this interconnectedness helps to facilitate the development of decentralized applications (dApps) because different dApps will have unique traits that make them different from each other.

For example, a person has a subscription-based dApp on one blockchain and they want to buy tokens for their app on another blockchain. Their Polkadot account can automatically purchase those tokens in exchange for their subscription fee.

Another example would be if you sell your car on one blockchain and want to get paid in another blockchain. Polkadot can automatically convert the tokens from the selling blockchain into the other currency you’re getting paid in.

What is Polkadot exactly?

Polkadot will be a new type of distributed system which will be able to run concurrent extensions across various blockchains and act as a single entity on these different chains. In this way, it has all of the functionality expected from a DLT created before (i.e Smart Contracts and dApps), but can also connect to other blockchains for decentralized features that are not possible with previously existing chains….Polkadot is designed to be a data sharing network that can connect to other blockchains and enable them to communicate with each other. There are three types of blockchains that Polkadot can connect to:

Additional information on Polkadot’s structure can be found on the website here: https://polkadot.network/

What does Polkadot actually do and why is it important?

The Polkadot team further explains on the website that Polkadot will be an extension of a single blockchain. This allows for dApps to be built on top of it. Because of this, Polkadot will be able to store information within the platform, thus allowing for different systems to play together within the same ecosystem. This includes things such as data storage, dApps, and smart contracts.

Adding on to the previous example (subscription-based app vs buy tokens from another blockchain), Polkadot would allow you to automatically purchase both tokens in exchange for your subscription fee.

How does Polkadot work?

The team has stated that they want to create a multi-chain network with as little human intervention as possible. They believe that the blockchain shouldn’t be controlled by one group of people. The idea is to have a fully decentralized, open source, multi-chain platform where all chains in the network can communicate with each other.

However, I am not an expert (or even close) on Polkadot so I will not be diving into how it functions too much. Please refer to their website for more information: https://polkadot.network/

The team working on Polkadot is a small group who initially developed Polkadot as a personal project. The project was launched in February 2017 after Roger Ver donated $10,000 worth of Bitcoin Cash for development. Roger Ver has also personally invested large sums of money into the project in the form of a major investment round that took place in June of 2017.

There are a number of team members who have master’s degrees and PhDs from prestigious universities. Many of these individuals have decades of experience in system administration and networking technology. The team is comprised mostly of software engineers, but there are also people who have worked on network engineering and blockchain projects in the past.

Blockchains are known to have scalability and speed issues. Volume causes blockchains to slow down, and causes transactions to cost more. Polkadot has stated that they will be able to solve this by allowing for parachains which can contain features such as state channels (due to the fact that each parachain will be its own independent blockchain).

Another solution is the relay chain, which allows for proof of stake to take over from proof of work. This would reduce block time and make transactions faster.

Their solution also includes sharding, which will allow for shards to contain a variety of transactions. This will essentially split up the blockchain into smaller chains (thus increasing throughput).

The Polkadot Token, or DOT

Another awesome feature that Polkadot will have is actually a cryptocurrency called the “DOT”. The DOT token will act as a governance token and can also be staked in order to receive payment for securing the network (similar to Ethereum). The token price has already risen immensely in its short time on exchanges. You can check out the DOT/ETH price and charts here: https://coinmarketcap.

Where can I buy Polkadot (DOT)?

Polkadot’s token (DOT) is currently available on the following exchanges:

Probably the easiest and cheapest way to buy Polkadot is using Binance.com (although this can be changed if you are using a different exchange). You can go to the exchange > Basic > Deposit > select Crypto. Then select the coin of your choice. Then choose the wallet address you would like to send it to. That’s it, now you have your Polkadot (DOT) and can purchase other coins which might be more profitable in the long run.

Where Can i Store My Polkadot (DOT)?

Polkadot has a few options for storage as well. There are 3 options: Parity, a wallet being developed by the Polkadot team; Mist, a popular Ethereum wallet; and Ledger Nano S, for hardware wallets. All of these wallets have native support for the DOT token as well!

Comparison with other blockchain related projects

There are a few projects that are in direct competition with Polkadot.

In order of similarity to Polkadot, is the Cosmos-mesh network. The Cosmos-mesh network is similar to Polkadot in that it too aims to provide interoperability and a connection between blockchains. Like Polkadot, it seeks to allow for the trust but verify model when connecting different blockchains together. The major difference between Cosmos and Polkadot however, is that Cosmos has decided to go with an iterative approach while Polakdot chose a parallel one. As far as this approach goes, it seems like both of these projects will be successful in their own right.

Moreover, Cardano and Ethereum are also projects with similar goals to Polkadot. Cardano aims to allow for the interoperability of different chains and Ethereum will be able to transfer tokens automatically from one blockchain to another. However, Polkadot has stated that they will be open to exploring other consensus engines in the future.

Polkadot has been the focus of many other blockchain related projects. Most other projects are paying attention to what Polkadot is doing. There are a few scenarios as to what could happen in the future for Polkadot.

Continued Success: Look at the overall market and how many projects will be successful in their own right. If all of these projects are successful, Polkadot will have no reason to exist as it will be obsolete anyways. This level of success will cause a decrease in demand for Polkadots, which could cause it to drop in price. The risks in this case are low.

Increased Competition: There are a few projects that are similar to Polkadot in that they have the same goals as Polkadot does. As stated earlier, this could cause some level of increased competition between these projects and thus affect the overall price of Polkadot. You will need to be more specific with your choice in this scenario. For example, if you think Cosmos and Ethereum will be more successful than Polkadot, then you should first look at the Cosmos or Ethereum price charts.

Polkadot is a new blockchain project with great potential. This is only the beginning of its highly ambitious plans! I think the fact that it’s based on the Ethereum blockchain is excellent. The team backing Polkadot has a very strong track record and a lot of experience with blockchain development which I believe will be reflected in their results.

If you enjoyed this article or have any questions, please comment below! I will be happy to answer any questions or concerns you may have regarding Polkadot.

Also, feel free to check out my other dApp related articles here: https://medium.So if you are interested in Polkadot, please do your research and be sure to check back often to get all the latest news on their progress. I will be doing video updates on the channel so keep an eye out for those as well!

Disclaimer: I am not a financial adviser. This is not intended to be financial advice. Do your own research before investing in anything. Be sure to double-check everything I stated above before proceeding further.

Jonas is an entrepreneur and crypto enthusiast. He has been releasing cryptocurrency content since 2015, and prior to that at university he co-founded multiple student groups related to technology, entrepreneurship, startups etc. Jonas focus is on developing blockchain solutions for real-world problems.

Got a question or an opinion for this article? Share it with us! Cancel reply